is a open-source application security project. The OWASP community includes corporations, educational organizations, and individuals from around the world. This community works to create freely-available articles, methodologies, documentation, tools, and technologies.


WebScarab is a framework for analysing applications that communicate using the HTTP and HTTPS protocols. It is written in Java, and is thus portable to many platforms. WebScarab has several modes of operation, implemented by a number of plugins. In its most common usage, WebScarab operates as an intercepting proxy, allowing the operator to review and modify requests created by the browser before they are sent to the server, and to review and modify responses returned from the server before they are received by the browser. WebScarab is able to intercept both HTTP and HTTPS communication. The operator can also review the conversations (requests and responses) that have passed through WebScarab.

WebGoat is a deliberately insecure J2EE web application designed to teach web application security lessons. In each lesson, users must demonstrate their understanding of a security issue by exploiting a real vulnerability in the WebGoat application. For example, in one of the lessons the user must use SQL injection to steal fake credit card numbers. The application is a realistic teaching environment, providing users with hints and code to further explain the lesson.

References to WebGoat documentation or solutions.

These are the simple steps I followed on a Windows 7 laptop.


You should be ready to go now at the OWASP Security Training.

Posted by Chandrasekar Rathinam at 10:58 PM

Most of the Below tools available in OWASP LIVE CD v 2.0 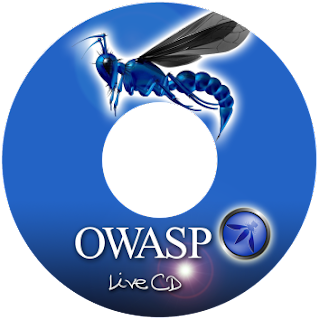 Posted by Chandrasekar Rathinam at 9:33 PM 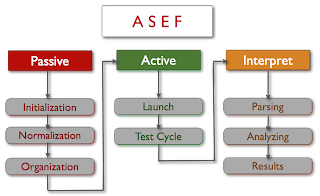 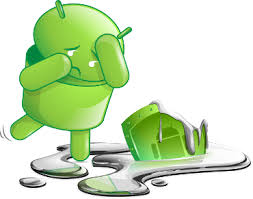 Fern Wifi Cracker :
is a Wireless security auditing and attack software program written using the Python Programming Language and the Python Qt GUI library, the program is able to crack and recover WEP/WPA/WPS keys and also run other network based attacks on wireless or ethernet based networks

The Software runs on any Linux machine with the programs prerequisites, But the program has been tested on the following Linux based operating systems:

The Program requires the following to run properly:
The following dependencies can be installed using the Debian package installer command on Debian based systems using "apt-get install program" or otherwise downloaded and installed manually 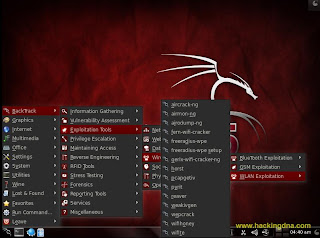 Arachni :
is a feature-full, modular, high-performance Ruby framework aimed towards helping penetration testers and administrators evaluate the security of web applications. Arachni is smart, it trains itself by learning from the HTTP responses it receives during the audit process.
Unlike other scanners, Arachni takes into account the dynamic nature of web applications and can detect changes caused while travelling through the paths of a web applicationâ€™s cyclomatic complexity.

This way attack/input vectors that would otherwise be undetectable by non-humans are seamlessly handled by Arachni. 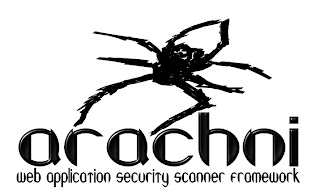 To scan via the user-friendlier Web User Interface, just run:

This will setup a Dispatcher and fire-up the WebUI server for you.

Then, point your browser to http://localhost:4567, accept the default settings and start the scan.

Posted by Chandrasekar Rathinam at 12:56 AM

is a minimal Interactive Exploit Framework which acts as a frontend for quick systems vulnerability exploitation. It is a collection of remote exploits using which one can compromise vulnerable systems. winAUTOPWN takes inputs like IP address, Hostname, CMS Path, etc. and does a smart multi-threaded portscan for TCP ports 1 to 65535. Open ports are then recognized and exploits applicable to those ports are executed with the aim of gaining a remote shell or the ability to run remote commands in certain cases. 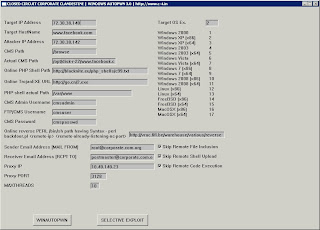 WINDOWS AUTOPWN or winAUTOPWN is an auto shell gaining // security penetration tool. It can also be used to test IDS, IPS and other monitoring sensors/softwares.


Besides the above, winAUTOPWN can also be used as an efficiency testing tool for Intrusion Detection Systems (IDS) and Web Application Filters (WAF). winAUTOPWN has a vast repository of exploits for various Operating systems like Microsoft Windows, Apple MAC OSX, Linux (various), BSD systems as well as for well-known services and daemon software. winAUTOPWN also contains a massive database of Shell Upload Vulnerability, Remote File Inclusion and Remote Command Execution exploits. These can be fired one after the other instantly and this can aide is checking if the WAF is preventing / alerting accordingly against such threats or no. Similarly shell aiming exploits too can be fired up in a row to test the strength and effectiveness of IDS and IPS.

WinAUTOPWN also has a BSD based cousin called bsdAUTOPWN. bsdAUTOPWN is a just like winAUTOPWN but is not an exact recompilation of winAUTOPWN. It has been written from scratch for and on FreeBSD OS to match the power and functionality offered by the Operating System. Like winAUTOPWN, even bsdAUTOPWN has a multi-threaded portscan feature and it too detects open ports and attempts to exploit them accordingly using the available exploits in the arsenal. We’ll come to a detailed discussion about bsdAUTOPWN later. 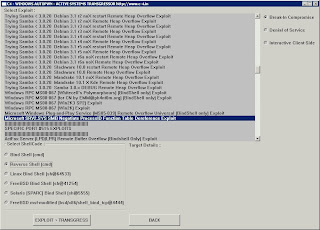 Windows GUI as well, which takes similar inputs and feeds it to the main winAUTOPWN console: 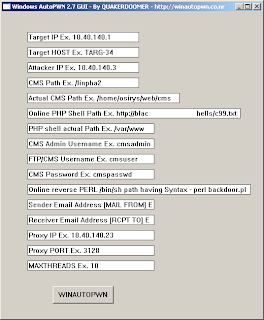 How to use command-line in winAUTOPWN ?

Command-line usage has always been a mark of a power user in any console based penetration testing tool. winAUTOPWN’s entire interactive interface can be pre-fed with values using command line options as explained below : 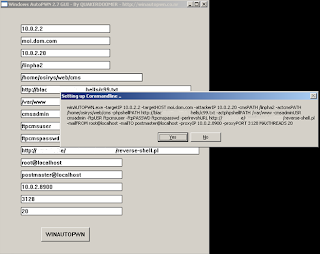 Direct Link : Click Here
Posted by Chandrasekar Rathinam at 7:03 AM